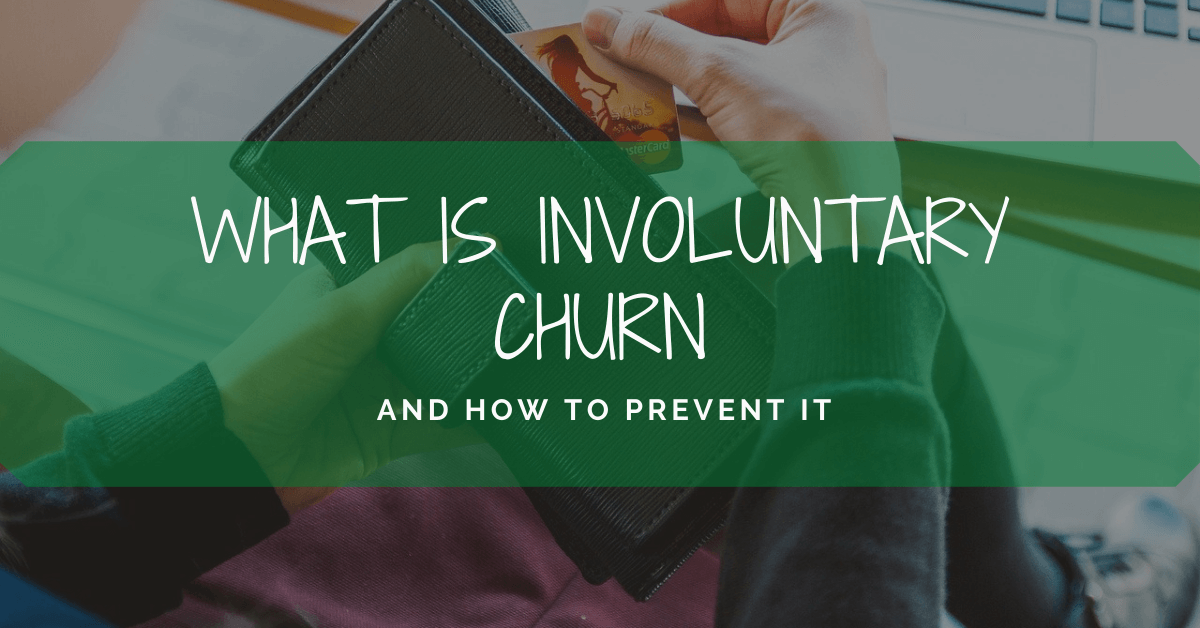 What is Involuntary Churn and How to Prevent It

If you’re a Software as a Service (SaaS) or subscription business, you can agree that churn is the most frustrating thing that can affect revenue. If your business relies on subscriptions, you can agree that customer churn and revenue churn are huge problems you’re trying to fix. One of the worse things that could happen is involuntary churn. In this article, we’re going to go over what that is, how it happens, and how you can prevent it.

Before we get into the topic at hand, let’s first address what churn is in general. A churn is when a customer stops paying or subscribing to your products or services. Some of this is intentional while some are not. When your subscribers churn without intending to stop using the service, it is considered an involuntary churn. As a growing business, it’s your responsibility to reduce your churn rate.

How Does Involuntary Churn Happen?

Involuntary churn occurs when a customer encounters a payment failure, leading to their subscription being cancelled unintentionally. Not only do you lose paying customers, but also a part of the monthly recurring revenue as well. In most cases, customers undergo unintentional or involuntary churn happens for the following reasons:

Examples of Soft decline are the following:

On the other hand, a hard decline happens when the issuing bank disapproved the payment completely. Failed recurring payments that fall under hard declines are due to the following reasons:

One of the main differences between a soft and hard decline is that a soft decline has the chance to go through if you retry it again. However, a hard decline isn’t going to process no matter how many times you try it. The most probable reason is that the card is either lost or stolen.

Now, let’s understand the difference between voluntary and involuntary churn. Voluntary churn is the purposeful cancelation of subscription. Unlike involuntary churn, voluntary indicates an underlying problem that you need to spot and fix. It could be subpar customer experience, mediocre customer service, or a bad pricing strategy. Maybe you’re trying to appeal to the wrong audience. Whatever the reason may be, resolving that issue will automatically reduce your churn rate.

Neglecting a voluntary churn could potentially push your customer acquisition cost to overwhelming levels. That means as your churn rate increases, the cost of attracting customers also goes up. In comparison, a good customer retention rate will cost you five times less. From this comparison, you could see that both have their own set of problems that you have to deal with. Otherwise, your customer base and revenue will continue to plummet.

How to Prevent Involuntary Churn

Don’t be passive! When it comes to dealing with your churn rate, you can’t just wait for it to go away. If you don’t do something, involuntary churn occurs and will continue until you do something about it. With that said, here’s how you can handle involuntary churn before and after your customer’s payment fails to process.

1. Email Customers About their Expired Cards

Make sure you send your email a every month before the card expires. Don’t wait a week before you notify your customer. Most credit card issuers tend to send customers a new card roughly 30 to 60 days before their card reaches its expiration date. That means you should send them an email at least 30 days prior since they will likely have the new card by then.

This one works best for customers with annual plans. It’s a bit controversial since some companies don’t send notifications before renewing their annual subscriptions. The reason is that it might give customers a chance to cancel their account.

But here’s the catch. If a customer wants to cancel their subscription, a billing of hundreds – or even thousands – of dollars on their subscription account isn’t going to convince them to stay. On the other hand, sending annual renewal emails can give you the opportunity to prevent failed payments and even involuntary churn.

The majority of credit cards expire every three years. That means there’s a chance that some of your annual subscribers have already gotten new credit cards between the time they originally signed up for your product and the time they’re up for renewal.

By sending an email prior to that period, you are also reminding them that they have a charge coming up. You are also preventing the occurrence of involuntary churn Doing so will give them the chance to update their payment information if necessary.

However, they see you, break a conversation about random things, and even drop by your home to spend some time with you. They think everything is fine. You go along with it, even though it’s bothering you that they still haven’t paid you the money they owe.

Have you processed that scenario in your head? That’s also similar to when your customer’s credit card declines, but you keep letting them use your product without saying anything. There’s a reason why it’s called involuntary churn. There are many cases when your customer genuinely isn’t aware about their expired cards or there was an issue with their payment. That’s why you need to remind or notify them about it.

You may have a hard time collecting that debt your friend owes you. But when it comes to your business, you can set up a paywall or in-app notifications. That way, they will be notified whenever their payment fails. Doing so will also prevent and reduce involuntary churn and help retain your customers.

Here’s an example of what most companies would do to deal reduce involuntary churn. Whenever a payment fails, they place in-app notifications with this message: “There’s a problem with your credit card on file! Please update your billing now.” You also place a convenient button that says “Update.” Tapping this button will redirect your customer to their credit card information.

Usually, companies give their customers a 7-day grace period to update their billing information. During this period, they can still use the app. However, the notification will stay at the top or bottom of the screen. If they haven’t fixed their billing issue within the given grace period, companies will then put up a paywall with a form for them to update their credit card information to regain access to the app.

Many customers don’t really take one or two emails seriously, if we’re being honest. That’s why you should consider sending more until you get their attention.

Dunning emails are an effective way to collect payment to you customers without nagging them. These emails are considered as transactional, and will notify your customers about the status of their accounts, as well as the next steps to continue with your product or service.

By sending multiple dunning emails, you’re going to get your customers attention. In turn, they will try to update their billing information. That way, you won’t have to worry about involuntary churn happening.

Finally, you should consider retrying every failed payment. Many payment providers feature a built-in retry process where it will resend notifications about failed recurring payments that decline. For instance, Stripe, a popular online payment processing system, will retry credit card payments up to four time if their payment fails. This method is an excellent way to prevent involuntary churn from soft declines.

If you can recall, soft declines are failed recurring payments due to a technical issue. However, it is fixable and will even have the chance to go through once the issue is addressed. That means if it’s retried later, the payment will eventually go through. Your customer may just need to update their billing info or expiration date.

While effective, keep in mind that you should always reach out to your customers the moment their payment fails. Don’t keep attempting to charge their credit card over and over again. If you’re going to use an automated system in retrying their cards, consider spacing it out instead of trying to charge it once a day.

When it comes to involuntary churn, it’s crucial for you to not be passive about it. The good thing about involuntary churn is that it’s quite simple to control and reduce. The challenge is having the willingness to actually spend time dealing with it. Involuntary churn is a small problem at first, which is why many subscription businesses ignore it. But when it gets serious, it can potentially ruin your chance at increasing your customer base and revenue. So, make sure you deal with involuntary churn right away.

Our recurring billing software helps you get paid. Save time, money, and your sanity when you let ReliaBills handle your bill collection, invoicing, reminders, and automation..