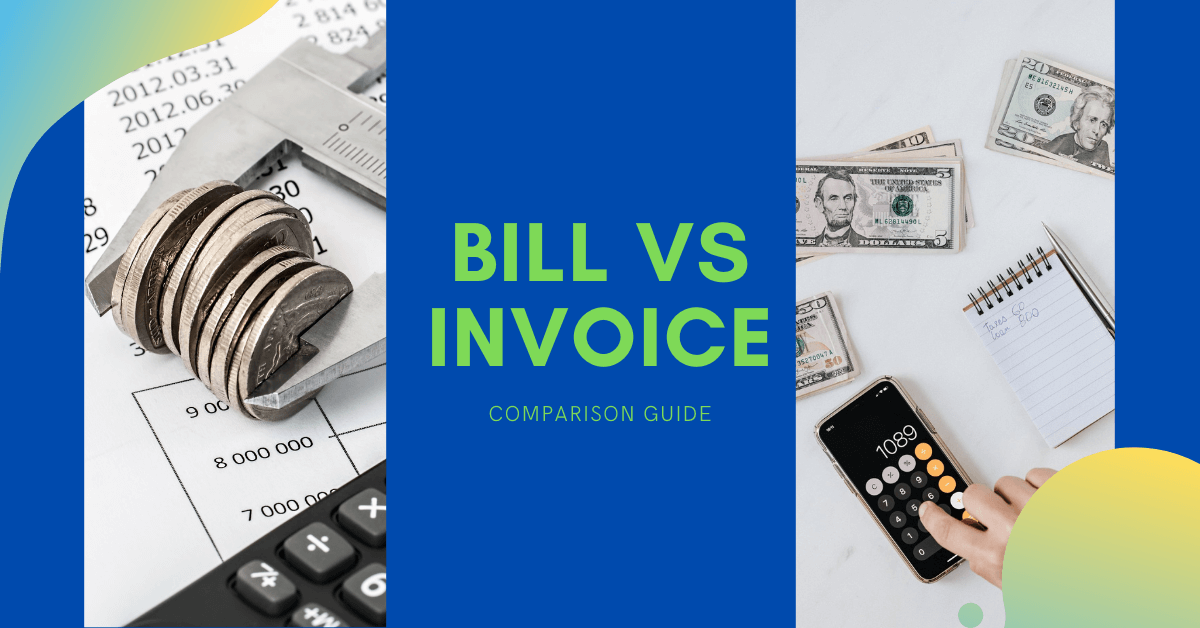 Bill vs Invoice – A Comparison Guide

In the world of small business, there is a lot of jargon that gets thrown around. For seasoned veterans, this won’t be a problem as they already know the differences between these terms. However; for people who are just getting started, it can be a nightmare. Starting a business is already challenging. Familiarizing with business terms only adds another layer of confusion. That’s why you must get familiar with these terms before you delve deep into your business operations – starting with invoice and bill.

Every business manages and completes transactions, which is why you need to know and understand the differences between a bill and an invoice. Some people, usually starters, think that both invoice and bill are the same things. It hasn’t been a clear-cut distinction so far, and many business owners – even veterans – use the two terms interchangeably. However, it’s time for you to know that both of them are not the same thing.

In this article, we will settle this once and for all. We will explain the differences between an invoice and a bill, as well as teach you how you’ll use them in your business.

What is a Bill?

A bill is a type of document detailing owed payment that’s expected to get paid immediately. For example, the sheet that you receive at the end of a stay in a hotel is a bill. As what the definition says, you’ll have to settle the payment immediately.

From that example, you can see that a bill is usually received immediately after the products or services provided. The expectation will always be that the bill will be paid – in full – at that time. Typically, it describes the amount of money that is owed to a vendor.

What is an Invoice?

An invoice, on the other hand, is a document sent from a vendor to a client that features an itemized list of the goods or services provided. In addition to the itemized list, the invoice also includes the price for each item. At the bottom, you will find the total amount of money of all the items on the list.

Unlike a bill that’s brief and straightforward, an invoice contains other information such as the following:

In terms of payment, it should include the timeframe in which the buyer has between receiving the invoice and paying it. It also includes consequences if the invoice isn’t paid on time. Once an invoice does go unpaid, you’ll need to keep track of it. For invoicing to work smoothly, you’ll need to use accounting software. That way, you can automate everything and avoid any potential errors.

Difference Between Invoices and Bills

From their definitions alone, you can already see that there is a glaring difference between an invoice and a bill. However, there are still some things that you need to know to complete this entire discussion. According to Fundera, one of the most effective ways to understand the differences between a bill and an invoice is to take a closer look at each terms’ element:

1. Perspective Between Business and Customer

If you create an invoice and send it to your clients, they’re going to think that they’re receiving a bill from you. While it’s the same document, the difference lies on who’s referencing the document. It all comes down to perspective. A vendor creates and sends an invoice, while the customer receives it as a bill they have to pay.

When you’re looking to understand whether someone is referring to an invoice or a bill, ask yourself this question: “Are they asking for money, or do they owe money?”

Most of the time, a vendor will provide services on credit. What this means is that they will spend their time on a specific task and ask for payment once it’s complete. The period of “later” is determined by the agreed-upon payment terms. These terms are discussed during negotiation.

When the goods or services rendered has been made, the vendor will then create and send an invoice. The customer is then expected to pay that invoice within a specific period. However, payment is not due immediately.

This is all the information you need to know the difference between an invoice and a bill. As you can see, they are entirely different from each other. Now, you know how and when to use each term. If you want to create outstanding invoices, check out ReliaBills now. It’s a FREE cloud-based invoicing system that automates everything for you.

Our recurring billing software helps you get paid. Save time, money, and your sanity when you let ReliaBills handle your bill collection, invoicing, reminders, and automation..